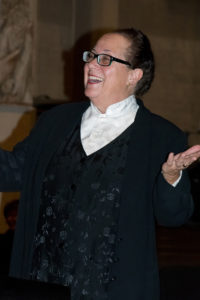 Linda Horowitz is from Los Angeles and studied music at universities in Southern California. In 1980 she came to Germany for a Konrad-Adenauer-Scholarship and received her diploma in choral and orchestral conducting from the Frankfurt School of Music. She made her debut at the Alte Oper Frankfurt and in 1987 became the first female choir director in Germany to take a position at the Theater der Stadt Heidelberg. Linda Horowitz conducted opera galas and symphony concerts, produced for the Hessischer Rundfunk, worked as a member of the expert jury for choir and orchestral competitions and worked with the youth symphony orchestra of the state of Hessen.

In 1996 she was a guest lecturer at the Detmold College of Music, and in 1997 received a visiting professorship at the University of Claremont Colleges in Southern California in the choir and orchestra direction. In addition, she is still active as a lecturer and conductor at the Academy of Music in Darmstadt, where she also heads the Academy Choir and the orchestra.

Linda Horowitz already directed the German-American Community Choir® e.V. from 1989 to 1993 and produced “The Celestial Country” by Charles Ives, G.F. Handel’s “Judas Maccabaeus” and “Mass: A Theater Piece” by Leonard Bernstein for the Hessische Rundfunk TV network.  Since 1998 Linda Horowitz returned to her role as conductor of the GACC.

Under her musical direction, an acclaimed German-Vietnamese music project was produced in April 2007. Together with the German-American Community Choir® e.V., the International Choir Hanoi, the Chorus of the Ballet Theater and Hanoi Opera, and the Vietnam National Symphony Orchestra, Haydn’s “Creation” was performed four times in Vietnam. During this special event 200 musicians and singers of different cultures presented an amazing performance in Hanoi and Saigon.

Pianist Benedikt Fox was born in 1988 in Bad Dürkheim in Rhineland-Palatinate. He received his first piano lesson at the age of five, and won several awards in the young musicians’ competition “Jugend musiziert” (including third prize at the national competition in 2006) before he went to university. After studying music teaching in the piano class taught by Thorsten Larbig, he began a degree course in instrument teaching majoring in piano under Prof. Axel Gremmelspacher in 2014. He completed his degree in 2016. At the university, he worked as a répétiteur in the singing department and headed tutorials on the subject of aural training. Benedikt Fox has been a regular performer at the Burgfestspiele (Castle Festival) in Bad Vilbel, and since 2014 has been a musical director of various productions, including “Blues Brothers”, “The Wizard of Oz” and “Jim Knopf und Lukas der Lokomotivführer”. He has gained further theatre experience at the Hessisches Staatstheater in Wiesbaden. Since October 2013, he has been sponsored by Yehudi Menuhin Live Music Now Frankfurt am Main e.V. together with his chanson partner Theresa Winterer, a finalist in the 2013 German song contest “Bundeswettbewerb Gesang.”